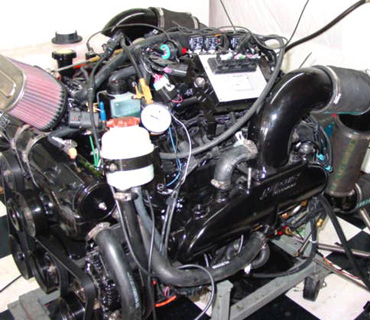 We at Full Throttle Marine are one of the few facilities that have a prop shaft dyno capable of up to 800 HP and an engine dyno room plumbed to run marine engines in a complete wet environment. Thanks to one of our customers, Mark LeBlanc, an opportunity arose to do some comprehensive testing on a Mercruiser, 496 Mag. HO. The engine is installed in a 2006 Nordic Heat. He brought us the boat to upgrade the engine with a Raylar 525HO kit.

Our first order of business was to get some baseline numbers on the boat. We headed to our local lake, GPS in hand. Weather conditions were 65 degrees, flat water and approximately 900 ft. elevation. We made 5 different runs, with 2 different drivers. The slowest speed was 62.6, fastest 63.5. Average RPM was 4920 on the smartcraft digital tach. Let me interject at this point the Heat really does not like glass smooth water. I’ve personally driven this boat a couple of MPH faster in more chop. Nevertheless, those were the conditions presented to us, now we have our baseline. Back to the shop for a dyno pull. We hook up our Land & Sea 13” Siamese-rotor prop shaft dyno with automatic load valve and DynoMax 2000 data acquisition software on the lap top. We made a total of 4 pulls all within a couple of HP of each other. Final prop shaft HP was 387.8 at 5000 RPM, using SAE Standard correction method.

The Nordic is equipped with dual gas tanks. This made it handy to test one myth that is commonly questioned. Will I gain any power by running premium fuel? We filled one tank with 87 octane the other with 93. Peak HP came in at 387.3. That is ½ of a HP less than with 93 octane. Studying the dyno sheets shows the 87 test to be within 1-2 HP of the 93 octane across the board, which falls within the acceptable tolerance of repeatability. I think we can safely say there was no difference between the 2 type fuels on this engine. 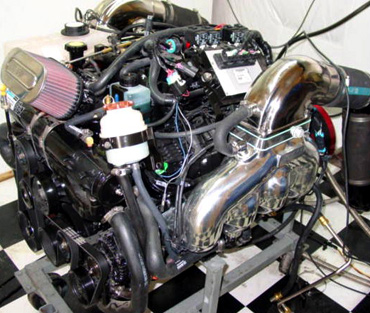 OK, let’s make some horsepower! Off come the cast iron Mercruiser exhaust manifolds(earlier years have aluminum manifolds). We have a brand new set of polished Dana Marine exhaust manifolds with the Vortex IV risers. Talk about a nice kit! Everything was neatly labeled and went on without a hitch. Total install time was less than 2 hours. We had ordered these with the optional 02 sensor blocks so we could run our dyno’s oxygen sensor. From testing done by Dana Marine and Raylar, I was expecting the engine to run a bit lean requiring a fuel pressure adjustment, but decided not to touch it to begin with. Again we made several pulls. The best of which netted a peak HP reading of 408.7 at 5000 RPM. The A/F ratio was right around 13.6:1 which is where Larry said the 496 made best power, so we didn’t touch it. We’ll fine tune it after the Raylar kit. That is a 21 HP increase at peak RPM. I was expecting more based on advertised claims*.

Well, let’s go to the lake and see what we gained. My first observation was the engine sounded better and had more throttle response. We idled out of the no wake zone and nail it. Seat of the pants told me it was much stronger out of the hole. I didn’t measure time to plane, but it was noticeably better. Cool, so far so good. Weather conditions were very similar to the baseline testing, except there was more wind. I could not find a glassy smooth stretch of water like we had the first day. With the added chop the boat aired out better. Again we made numerous passes, same lake, same GPS, same driver. Our slowest speed was 64.6 and fastest was 65.5. RPM increased by 80.

I’ve set up and run many Nordic Heats. I know that it takes approximately 17 HP increase to gain 1 mph in this boat. Interestingly we gained 2 with 21 HP. A quick calculation tells us that the prop slip is less on this test (same prop as before). Why would that be? A couple of thoughts come to mind. First, we saved about 50 lbs with the aluminum exhaust over the cast iron. Secondly, there was more chop on the lake. Remember my comment about this boat liking chop? There you have it. We hoped for a little more increase based on Dana’s 48 hp increase claim*, but based on all of my experiences with exhaust this is about what I expected. Did I mention they look really cool?

*Dyno tests performed by Dana Marine were with wet exhaust manifolds, but the water was collected and not mixed into the exhaust gasses as they are in a marine application. This may well account for the higher hp increases they were able to achieve during dyno testing as opposed to “in the boat” data.

496 Dyno Testing At The Crank

Now it’s off to the shop to pull the engine and bust some more myths.

Well, the engine’s out and on the dyno stand with the Dana exhaust in place. One question that comes to mind. On the Nordic installation the exhaust uses an S pipe, so the exhaust makes 2 almost 90 degree turns before exiting the boat. Could this be costing us some horsepower? Easy enough to prove. We pulled the complete exhaust system out of the boat and set it up on the dyno. We made a couple of pulls with a resultant 454 HP.

Next we removed the boat exhaust and routed it straight. No change. Shoots that theory down. Back on with the stock exhaust manifolds. Now we get 431 HP. That is a 23 HP improvement at the crankshaft with the Dana exhaust, 21 HP at the prop. Well what do you know, we have an opportunity to verify another myth. Let’s remove the turbulators and see what we get. How about 438.8 HP. That’s 8 HP, or about ½ mph on this boat.

Every little bit counts though. We have one last opportunity. I have a set of custom Lightning headers hanging on the wall that came off my 28' Heat with 900+ HP. We bolted them up and fire it up. Sure sounds sweet. Even more responsive than the Dana’s. One quick dyno pull and there’s no more speculation. 451 horsepower. That’s 3 less than the Dana’s. Interesting! They did make 10-15 ft.lbs. more torque at all lower RPM, with the Dana’s finally passing them at 5000 RPM.

One last Myth to bust. How much horsepower does a Bravo drive absorb? For those of you that are observant, you’re probably ahead of me. It’s certainly not 25 or 30 HP like many have come to believe. It is a percentage. In this case with a Bravo X drive, right at 10%. I’ve done testing on 600 HP engines and lost 60+ HP to the drive.

Several months have passed and we’ve completed the Raylar install and testing. Sorry it’s taken so long. Just too much work and not enough time. As this article is directed at results, I’ll save the details of the install for another time. The instructions were thorough and it went together without a hitch. Now it’s back to the dyno to see what we accomplished. The one caveat to the project is that we sent the PCM to Whipple for their stage 2 programming. They tweak the fuel mixture, raise the rev limiter and adjust the spark timing to be much more aggressive. This requires a 120 degree thermostat and 91 octane fuel. 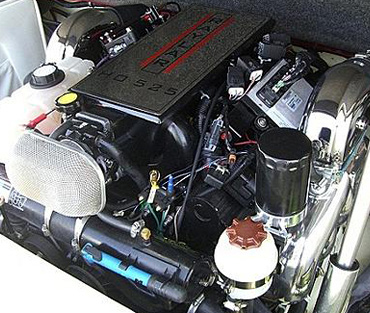 We installed the stock exhaust manifolds, with turbulators removed for our initial tests. We made several pulls, tweaking the fuel pressure up and down to get a feel for what air fuel ratio worked best. It made best power at 13:1 air fuel ratio. More than a few points either direction and the power started falling off. Off course this is what L arry had already told us, but being hard headed we had to see for ourselves. The numbers? 530 HP at 5400 RPM. We’ve already established that the turbulators cost us 8 HP, so I didn’t see a need to revisit that. Keep in mind that Raylar’s testing was done without water mixing with the exhaust, whereas these tests had complete wet exhaust. This would certainly account for some HP loss as compared to his testing.

Next, we bolt on the Dana exhaust manifolds. Again we make several pulls to adjust the A/F ratio and arrive back at the 13:1 number. This time we get 553 HP at 5400 RPM. Very nice numbers and right in line with the manufactures claims. Let’s see what it does in the boat. This time the test conditions were the same altitude as before, about 10 degrees warmer air temperature and smooth water. We were able to consistently get 72 mph with a best of 72.8. Cruise A/F ratio is a bit lean so we were forced to raise the fuel pressure a couple of pounds to bring that in line for now. We’ll send the PCM back to Whipple for some fine tuning in the fall.

In summary, with the Raylar 525HO kit, Whipple stage 2 programming and Dana exhaust we picked up 122hp & 9 mph. As a comparison, these numbers are slightly better than what that boat will run with a Merc 525 EFI under the same conditions.